Some information about what we are doing: fun sport, green energie & mobility, surfing, lifestyle 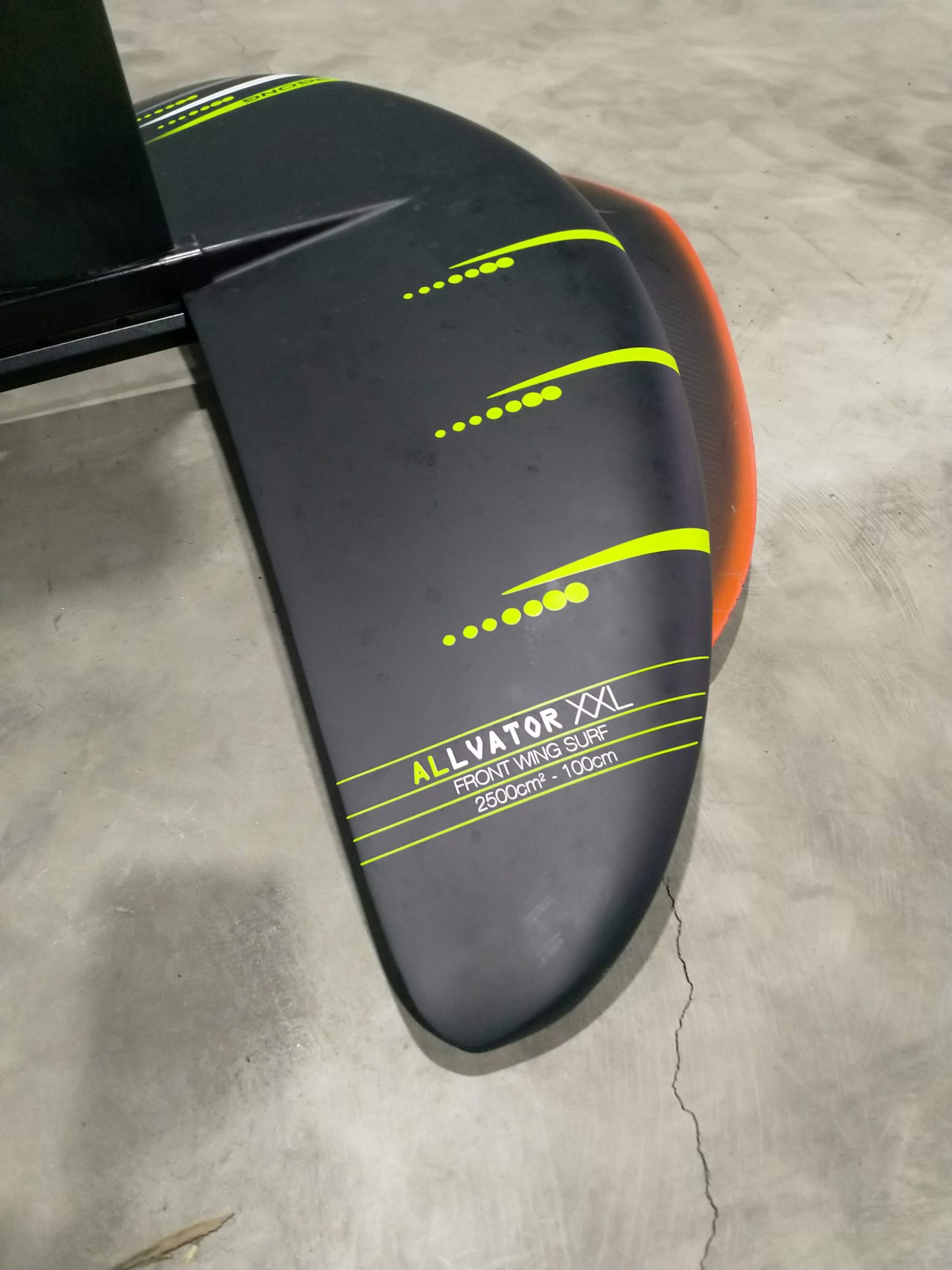 The Market for Hydrofoils is getting bigger and bigger. Brands are already presenting their second or third generation Foil Wings in more and more engineered and specialized shapes. There are fast ones, easy ones, Foils for kite, Surf, Wing- and Windfoiling. The different wing sizes, shapes, fuselage and mast length and, last but not leaset, different scopes of application in combination with more and more specific board shapes makes it difficult to keep the overview….Time to compare.

I recently got the possibility to get hands on the Gong Alvator XXL Foil. Gong is a french surfboard brand, offering boards for Kite, Surf, Wing as well as Kites, Wings and Foils (Website). Concerning Foils, Gong can score with their good modular system and low prices due to direct sales.

The Gong Alvator XXL is their biggest Wing with 100cm width and 2500cm2. It’s massive…. Originally designed for Pump and Surf-Foiling it also fits for wake foiling with low speeds and in the Wave. Compared to the Slingshot Infinity 76 Set you immediately see the crazy size.

The Wing comes with Gong’s Standard Fuselage and the 45cm / 400cm2 Stabilizer Wing. In comparison to the Slingshot FWind 2 Set, the Fuselage is shorter and only provides one Mast position (Slingshot offers the „Switch-Fuselage“ with four different positions in total).

The Mast however, sits exact in the same position than Slingshot’s most forward Pos. ‚A‘. With the usually used position ‚B‘ sitting slightly backward, it’s almost predictable that the Gong Foil’s pressure Point will be felt also more backwards or – in combination wit a Masttrack System like available on the RRD Pocket Rocket Board, the Mast has to be positioned more forward.

Aligned on the Gong Mastposition and Infinity ‚A‘ Position, both Front Wings‘ Ends match perfect together. Also, the longer Fuselage of Slingshot Windfoil Set gets more obvious. Longer Fuselage provides more stability but makes pumping less efficient or at least harder. So the test rides will show what ist better. So far, I always was happy with the Slingshot pumping abilities….

There are two points which pushes Lift power in light winds. The fist one is surface, the second one is thickness. The Alvator XXL has enough or perhaps even too much surface as the name already indicates. When it comes to thickness, it’s massiv Profile also fulfills this requirement. Compered to the Infinity 76 it’s obvious that it will generate good lift power already at lower speeds. Saying this, it will definetly ‚hit the wall‘ much more earlier concerning top end speed. As for the Infinity 76 the Top speed is said to be around 20kn, the Alvator XXL will max. be capable for perhaps 12-13kn – I guess.

Like mentioned before, a nice Argument for Gong Products is the relative low price compared to normal retailer distributed brands. In the case of the Alvator XXL Foil, the set comes for 449 € including the transportation Bag. Not Bad, considering the +/- 500 to 700 € Price only for Slingshots Front Wing or at least 900 – 1000 € for a complete set, independent which brand. But what can you expect for this?

To be honest: A Rock-Solid Foil. Quality is similar to others, Parts are matching perfect and can be replaced by new ones if broken or by other ones out of the Gong Foil System. Perfect.

The only thing missing from first point of view is a longer fuselage which you might need when you want to use it for Wind foiling – not sure, but test rides will show.

The owner of the tested Alvator XXL Foil already hat an Infinity 76 Surf Foil for Wakeboarding. As he didn’t what to carry too much stuff around than necessary, the fuselage was modified to work together with the slingshot Mast:

The Gong Mast sits inside a recess of the fuselage and is fixed with three M6 Countersunk screws. The Slingshot Fuselage is a bit more narrow and the Mast sits on top of it, fixed with two M8 screws. I don’t know if Gong’s solution is more solid, many other manufacturers us the same principe. From technical point of view I guess it’s more a ‚in the head‘ thing and doesn’t provide any higher stability. The Slingshot System is extreme Solid and I never had any issues with it.

Nevertheless, if you have similar plans, ask an aluminium experienced workshop to close the three M6 holes, drill two new ones for M8 and adapt the recess to fit the Slingshot Mast.